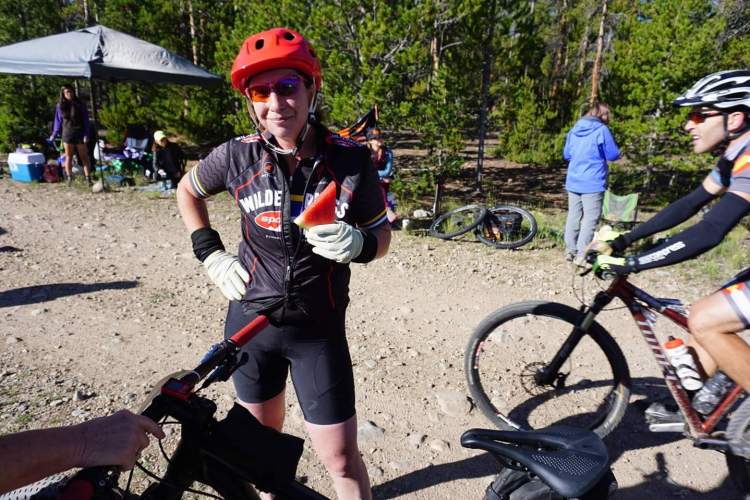 This blog series follows me, an extremely average cyclist, as I go all in to complete the legendary Leadville 100 race on a singlespeed mountain bike.

Why Leadville? The short answer is that this is something that I never thought I would do, singlespeed or otherwise. The long answer is a bit more complex.

This race is both legendary and notorious. Most cyclists have heard of it, and many non- cyclists know of it as well. It sets the scene for many personal victories and devastating heartbreaks alike, and yet for some, the race is just…meh. I live in the Land of the Badasses. We are a community of cyclists, skiers, ski mountaineers, climbers, ultra-runners, dirt bikers, and a whole slew of miscellaneous extreme adventurers. Because I too participate in some of these sports, my online world is also full of stories about, and interactions with people who have truly done the incredible, and  who are just winning in sport and in life. This is both inspiring and intimidating as hell. It feels like no matter what I do, or how hard I push my own boundaries, I encounter super-humans for whom my accomplishments are basically a walk in the park.

So, as we go into my fourth season, and Lee’s fifth, of chasing Leadville qualifiers, and racing the 100 itself, the whole thing becomes normalized. The LT100 doesn’t seem as obscene because I know people, both personally and through the Interwebs, who have done what I do, but much, much faster, or have done significantly harder races altogether. For instance, I get the luxury of riding my bike for 100 miles, it’s not like I have to run it. And the race isn’t that technical, it primarily covers dirt and fire roads, with some pavement thrown  in, it’s not like I have to navigate non-stop rocky, rooty singletrack. And it’s only one day of riding, it’s not like I have to do six days straight of racing. And there are plenty of aide stations, well-stocked with food, drink, and enthusiastic volunteers who can get me in and out of there fast, it’s not like I have to carry everything I need on my bike. And so, the LT100 MTB seems like good, friendly fun compared to the LT100 Run, or the Breck 100, or the Breck Epic, or the Vapor Trail 125, just to name a few.  I’ve heard many gripes and complaints from the gnarly and the jaded about how the race is too crowded, too commercialized and not a Real™  mountain bike race because there’s hardly any singletrack.

And yet, this race has got it’s grip on me, as it does for so many who keep coming back year after year, or those trying it for the first time. When I zoom out of Endurance World, and look at the general population, I realize, that this is not normal at all. Yes, there are burlier, more grueling events out there, but the Leadville 100 is hard. The race starts at 10,200 ft, and only goes higher from there, with about 12,500 ft of total elevation gain. It is just rough enough that you have to do it on a mountain bike. Last but not least, it is still 100 freaking miles! 104, to be precise. Perhaps, the accessibility of this race is the point; from those seeking to win, to those trying to beat their own time, to those just checking a box, or for some, the hardest thing they have physically ever done. For me, Leadville is a gateway race, the race that inspired all other races.

I initially got into mountain biking a few years ago as way to improve my off-road skills on my motorcycle. I liked that if something was too hard and scary, I could just get off my bike and walk. Can’t do that as easy with my 400lb moto. I am not a natural athlete, and I am a total weenie, so after a few rides on a low-end 26er, filled with spills, tears, yelling, and the sincere desire to throw said bike off a cliff and never ride again, Lee decided I deserved a Real ™  bike. I ended up with the an XC race bike, the Specialized Epic Comp, even though I swore I would never race, I just wanted something that would eat up miles. Then Lee decided that he wanted to race the 100. He first did it in 2015, and I worked that year as as an EMT, at the Silver Rush 50, the LT100 MTB, and the Run a week later. I became completely absorbed in the culture, the support, the party atmosphere, and the athletes themselves. I had to hold back my own tears when I saw those who didn’t make the cutoffs, and was so thrilled for Lee when he finished both the 50 and the 100 faster than he ever imagined. I saw that there were a lot of normal-looking people doing this, which got me thinking, maybe I could do it too. And I was hooked.

By then, I had already done a few local races, in spite of myself. My rides started getting a little bit longer, those local races became training races, and I started treating myself ever-so-slightly more like an athlete, and by January 2016, I found out that we were picked in the team lottery to race the 100 in August. I learned that what I liked most about biking is covering distances that I once was only able to do by car, and riding all types terrain to get there; pavement, dirt, singletrack, hike-a-bike, whatever. I am admittedly terrible at technical riding, and my endurance improved exponentially faster than my skill set. I am working on this, and enjoy riding harder (for me) terrain sometimes, but I like having a bit more space for mistakes when I’m racing. I like pedaling along and getting lost in thought, or enjoying the scenery, or jamming out to my iPod. I love seemingly endless roads, and how if you’re patient enough, they take you to some spectacular views, better yet, they are the spectacular views. I love the pure physicality of it, how hard it gets, and pushing on anyway. Maybe I am not a Real ™  mountain biker, but it turns out that Leadville is my type of race.

Brief progress report: Almost two months into my coaching program, I feel stronger and fitter, yet too tired to use that fitness. We are in the “build” phase, I just learned today it means that I will continue feel fatigued until I get used to the training load. Obvious to some, but I was holding my breath for extra rest days. Just a few weeks ago, I was wondering if Coach was going too easy on me, now I see that even on my easy days, I’m not reaching the same power numbers as I did on easy days before. Lee and I are slowly learning how to work around each others schedules, which today meant that we worked out separately, but we napped on our respective couches at the same time afterwards. I guess I will just have to keep plugging away at it and see what my body does, and hopefully learn to stop feeling so sorry for myself.