This blog series follows me, an extremely average cyclist, as I go all in to complete the legendary Leadville 100 race on a singlespeed mountain bike.

I have no idea what made me do it. In fact, years ago when I first moved in with Lee, I remember glaring at the broken down chunk of aluminum with two flat tires sitting out on his deck, wondering why he had something like this in the first place. Better yet, I was wondering why he still had it, taking up precious space, with no plans to use it again. He tried to explain it to me multiple times. It was something about the simplicity of it, how you’re just out riding your bike. I repeatedly inquired if it wasn’t better to be just out riding your bike with the ability to shift, because mountains, and he continued to assure me that it is just fun. It sounded too hard, and really stupid, and ultra-hipster, so I convinced him get rid of the old Mongoose singlespeed so we could move other junk that didn’t fit in the condo out onto the deck.

Lee used to ride and race both road bikes and mountain bikes in high school in the late 90s, a time he described as the first Golden Era of mountain biking. That Mongoose was from that era, before it became a Wal-Mart brand. He stopped riding after the bike maintenance became too much, and soon he moved out to Colorado, where skiing was king and motorcycling and hiking were his summer hobbies. After a single, disastrous day at Keystone Bike Park that ended with me deciding early on that I suck at this, and with Lee shouldering his rental bike with two folded wheels from halfway down the mountain, it was a few years yet before mountain biking was on our radar again. Fast forward to summer of 2016, and I decided that I need a singlespeed as a training tool to get stronger on my race bike. Kind of like when I started telemark skiing to get better at alpine skiing, and no longer alpine ski. Or that time I started mountain biking to get better at off-road motorcycling and found myself with almost no time for motorcycling. After giving me sufficient shit for giving him shit about his Mongoose, he found a cheap 29er Singlespeed for me on Craigslist, and down the rabbit hole we went.

After a few adjustments, I started riding the Single that August and through the fall. About a ride or two with me, Lee decided he needed one also. Singlespeeding was, and remains, humbling for the exact reasons one would think. For a brake-heavy rider like me, losing momentum from white-knuckling a downhill means stalling in the middle of an uphill. It’s so much harder to manage your effort, so there are plenty of pitches where I blow up and just have to walk. Flat terrain has me pedaling my brains out, and not doing much more than a glorified coast. I think singlespeeding is where the phrase “going nowhere fast” came from.

But it has been very encouraging too. In addition to looking cool, I love how it makes me feel. I was still riding way more terrain than I thought I would, and I was forced to look at the same old trails in a new way. I became a lot more comfortable with the fact that it’s okay to walk some things, and I had a ready-made excuse to my imaginary critics: “Hey, I only have one gear over here”! I love how a well-timed pedal stroke propels me up and over an obstacle. I love how on a pitch where I would normally rely on my easiest gear, I would crank right up and feel like the most powerful human alive. I fell in love with the simple, clean look of the bike – No shifters, no shifter cables, and no derailleurs. That simplicity gave me confidence in just how mechanically sound my bike is, and that made me feel unstoppable.

Last March, Lee and I went to race the Austin Rattler, about 40 minutes south of Austin, TX. We had done that race the year before, and wanted to try it on the Singles in 2018. We were watching the forecast, and saw that it would be raining a little bit the week of the race, but would dry up leading up to race day. We showed up in Texas to find out that the little bit of rain we saw in the forecast was actually a lot of rain in real life, and large parts of the course turned into mud bogs. I stayed completely optimistic that it would dry for the next day. My optimism gets me nowhere. With all the people pre-riding the course (us included), the trails were even more chewed up for race day. It was also a lap race, with several distance options available,  so the course got more and more destroyed with each tire track and each lap. We were walking through knee-deep mud in places (lots of places), and riding as far as the bikes would go until they bogged down to the hubs. After the first lap, many racers dropped out.

I was happier than a pig in ….mud. Not about other racers dropping out, their successes and failures have no bearing on mine. I was happy because it was so hard, because this dumpster fire was a shared experience with the intrepid among us who kept going. I was completely embracing how difficult it was, and I was literally satisfying some primal instinct to roll in it. I was happy because I was riding a Single by choice, using that pre-determined harder gear to plow through what was rideable, while many ended up singlespeeding by circumstance, after the mud chewed up their drivetrains. On my third and final 20- mile lap, I heard a rickety noise from somewhere on my bike. I did the logical thing, pretended it was coming from someone else’s bike, and just kept going. I got to the finish line a solid hour slower than I had the previous year. I was thrilled! I found out the noise I heard was the chain, stretched into a smile, magically still grinding over the ring and cog, barely hanging in there for me. That mud had eaten all of our bikes alive, and although I had gotten a lot of comments about how brave (stupid) and badass I was for doing the race on a Single, I believe that I finished because of that, not in spite of it. Lee was right all those years ago. It was simple, it was fun, and we were just out riding our bikes.

I am two months in. Since last week, I ended up needing an extra rest day, because I was a little bit sick. I am back on track and looking forward to the work ahead of me. Today was supposed to be a cross-training day, but with conditions not so great for skiing, I went out for a three hour, easy-paced fatbike ride instead. I enjoyed the hardpack before it’s supposed to snow for the next ten days. Yesterday, I had two hours on the trainer that destroyed me (in a good way, I took a nap afterwards). I started a meditation practice a few months ago, and that trainer session was the first tiny flicker of evidence of being able to use my fledgling practice in the real-world. I have my iPod, but I don’t have a smart trainer, so like most cyclists, I typically find indoor time about as stimulating as reading ingredients on the shampoo bottle while in the shower. However, yesterday, as I tackled this long workout with long intervals, I nudged my brain into focusing on the numbers I was supposed to hit, and the workout became more bearable, it went by quicker. I felt discomfort, and I felt fatigue, but I consciously “leaned into” it and continued to push. This was completely different from most of my trainer sessions when I rely on daydreaming about winning every bike race in the history of bike races while simultaneously being an amazing singer with the voice of an angel or Beyonce to get by. Small victories. 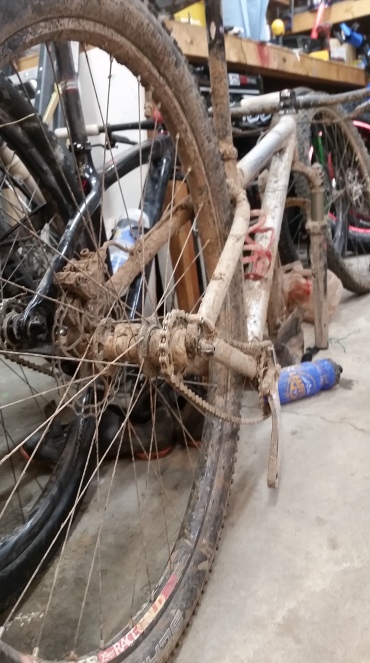